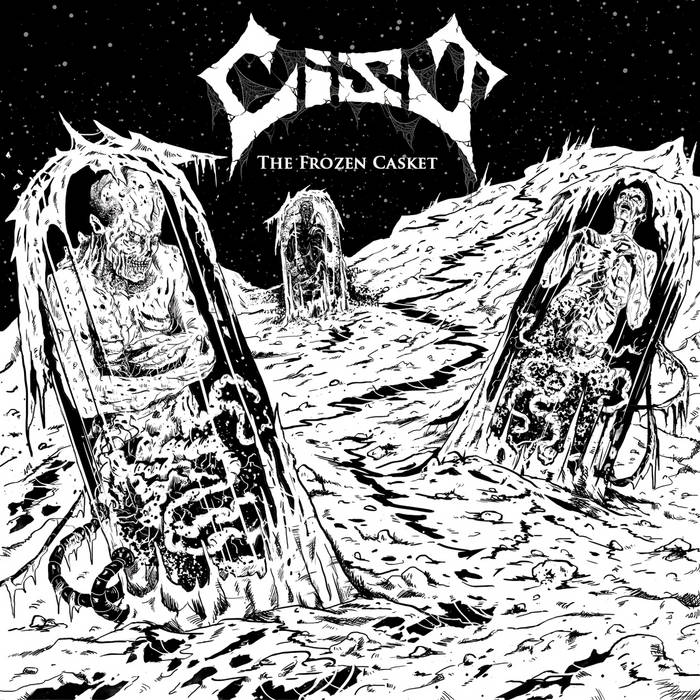 Smoldering in rotten decay, Russian Death Metal purists, CIST, infect the eardrums of anyone bold enough to tempt fate. Forging the fires of the past in order to lead the current pack of the modern "Old School Death Metal" movement, CIST pummel the listener with wildly brutal, yet tastefully melodic riffage, and harsh cryptic vocal fury. Thrashing and hammering in the vein of early Death, Pestilence, and Asphyx, CIST are a true testament to the legacy and power of Death Fucking Metal. Get this or die.

CIST was formed in 2014 in Smolensk, Russia, by Nick Komshukov after the breakup of his previous band Hell's Thrash Horsemen. Soon after the releasing their first demo "Synthetic Life" (2015), the band signed an agreement with a Greek label Alone Records to release their first EP "Chemcal Tomb" on 7" Vinyl.

Following the deal with Alone Records, CIST collaborated with U.S. Death/Thrash Legends, Solstice on a split CD released by HTH Records and Unspeakable Axe Records. In support, CIST embarked on a Russian Tour with a Thrash Metal band Entrace.

In 2016 the band recorded a new demo "Cryonesia" and started tracking their new EP, which became "The Frozen Casket". After 2 years of silence "The Frozen Casket" EP (2018) was first released in February 2018 by HTH Records & Metal Race (Russia) followed by a cassette release via Camo Pants Records (UK) (camopantsrecords.bandcamp.com) in March. A Special Extended 6 Panel Digipak Version, including 3 bonus tracks, will be released in late April courtesy of Redefining Darkness Records & Reaper Metal Productions (U.S.)

Track Name: Antisceptic
United by intolerance to nonconformity
They force their faith upon the world filled with uncertainty
Claim to be the remedy from spiritual disease
The judgments different from their own are destined to be ceased

Antisсeptic gives you revelation
Illuminates those who are to obtain humility

Terror comes to reign, reform mentality
Every night they bathe in blood of a fictive enemy
Victims of confession end up in mass graves
Others put on their knees intended to be slaves

Filling homes with sorrow, desecrating shrines
They spread their power built on fear and immoral crimes
Remains of peaceful life will be burnt with fire
Absorbing death the desert sand is to face the world's decline

Suffer, distress, murder
Preaching the deceitful righteousness
It will lead you to the end

And bury in the sand
To survive you take their faith with a weapon in your hand
And since you're free of choice amend those free to choose
Cut their throats, let them have no chance to refuse

Antisсeptic gives you revelation
Illuminates those who are to obtain humility

Terror comes to reign, reform mentality
Every night they bathe in blood of a fictive enemy
Victims of confession end up in mass graves
Others put on their knees intended to be slaves
Track Name: Incubation
Doomed to be defective or not to survive
They're not to choose their fate
They're still to arrive
Women in their feebleness
Are close to desperation
They give the newborn a chance to live
By incubation

A welcome son, the helpless one
Sealed from the air
Be the victim of despair

Your cries won't be heard

A welcome son, the helpless one
Sealed from the air
Be the victim of despair

Your cries won't be heard
Track Name: Injected Obsession
Don't let me live
The way I want unconsciously
Inject what I should feel
Inject what I'm meant to be
No matter what is real
Habitual world is false
Disillusion covers me
Embedding new ideology

My veins are pumped with hate
To those who don't deserve it
My mind's enslaved to be
A tool of someone's will
Track Name: Mitosis Simulation
Disdain and arrogance to the natural creation
The inherent properties of humanity
They search for the ways to subdue the organic world
Their science implies commitment of biologic crimes

Precise analysis - two words without a meaning
The ultrafast recovery is all they desire
Fake reports are made, the guinea pig is chosen
To finish the experiment of body renovation

Decisions are made
By what a man is made of
The blister grows
Due to the forced division of the cells
Track Name: Cryonesia
The endless night has taken the past away
In the frozen casket the dreams are reality
Deprived of the sense of time, forgotten for years
Within the obscurity and hollow in your mind

Soul’s replete with emptiness
You’re nothing, but still exist
Why
They lie
They bring
Just pain

The endless night has taken the past away
Reality is distorted, the dream is a nightmare
Dementia swallows your mind, you’re mentally lame
Until cold and darkness shelter you again

Remembrances emerge and shred
Morbid shapes form in your head
Desperate uncertainty
Will retrieve your entity
Track Name: Chemical Tomb
Plague obtains a new form
In the grave it’s to be born
Leaks from the underneath
Spread at a rate beyond belief
Leaves a toxic trace
As the buried flesh decays
Death is coming through
It’s always been inside of you

Plague obtains a new form
Soon it makes your babies lorn
Slays another prey
Feel your lungs just melt away
Inhale, suffocate
Taste the poison you create
Death is coming through
Just let it be a part of you

Chemical tomb
Track Name: Imitator
Trapped under ice for thousands of years
In the land where permafrost’s to reign
The unknown origin, unknown consequences
Follow the day this organism’s revealed

Back to life, for you it’s better off dead
Conversions cross the verge of fantasy
Flesh and mind’s perfect reproduction
Inception of irreversible extinction of your kind

Every piece of you is self-sufficient, an animal unto itself.
When a man bleeds it's just tissue.
But blood from one of you Things won't obey.
It's a newly formed individual with a built-in desire to protect its own life.

No escape, survivals are tied by fear
No beliefs but one that Jesus saves
Paranoid, you’ll never be the same
Out of time to prevent the humans’ fate

[Chorus]
Track Name: Synthetic Life
I've seen the end of normal human-beings
Who faced the top of new technology
No more blood is flowing through their bodies
They think they live but in fact
They are just some walking dead

Synthetic life, it's so pathetic
Dehumanized, existence's only
Lies (3x)

Bandcamp Daily  your guide to the world of Bandcamp